How handwriting your will creates confusion for your family
Author:
Philippe Richer 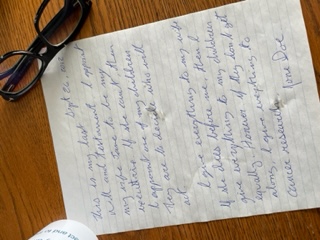 Nothing wreaks havoc more than an unclear or ambiguous will. Court reports—collections of court cases—are full of cases where a judge has to decipher and decide a deceased person’s intentions. The costs associated with estate litigation can be mind boggling. And don’t forget that every jurisdiction is different, so writing a will in Manitoba is different from writing one in other provinces. It’s all the more perplexing because these problems are easily avoided. Though you do need to know how - much like avoiding a hangover is as easy is making sure you’re also drinking lots of water; it’s all about knowing what to do and where to start.

The solution is simple. Really. It is.

Call your lawyer and have him or her draft your will. Yes, it will cost money. A complicated will can cost several thousands of dollars. But consider the consequences of not preparing a will, or even worse, preparing a will yourself.

It doesn’t matter whether you’re writing it by hand or using a will kit, it’s not a good choice.

You may have the best intentions, but people who prepare their own wills often fail to consider their estate’s value at the time of their passing. We all believe our current financial situation will remain the same. That’s normal. But we have difficulty forecasting events that change circumstances significantly. For example, what happens if you separate from your spouse? What happens if the cottage you want to gift to your eldest daughter increases or decreases significantly in value?

In addition to a change in your financial situation, people unfamiliar with the law or those who know enough to be dangerous, may attempt to create complicated distributions, which can inevitably create legal problems.

I had a file resolve in 2018—thank goodness!—where a testator (the person who made the will) tried to create a legal situation in which his spouse would be forced to get along with his children.

His children and the spouse were not related, as this was a second marriage. He attempted to create a spousal trust that converted into a three-way split if they couldn’t get along. This means the estate would be split three ways between the spouse, his son and his daughter. While this sounds like a great idea in theory, it’s not.

A spousal trust is a limited interest in an estate. The spousal trust would have allowed his spouse to enjoy the fruits of the estate while she was still alive (for example, income generated by assets. which in this case was the rent from an apartment block). On her passing, the assets of the estate—in this case the apartment block—passes to the children. However, you can’t create a legal situation where these two concepts co-exist. She can’t be part owner of the apartment building and have all the rental income at the same time. She has either one or the other.

Unsurprisingly, the children took the position that she only had a limited interest. Of course, the spouse took the opposite position, stating she was entitled to one-third of the estate, which was worth considerably more than the spousal trust. This file was headed to court.

Eventually, after much sabre rattling and threats, we negotiated a solution. I expect legal costs exceeded $100,000 split between five law firms. How did this happen? It happened because the testator had not consulted a lawyer and attempted to create his own will. The estate was worth over $3 million. He could have avoided the entire debacle had he spent a really generous amount of $2,500, which in the end would have saved the estate an estimated $97,500. This cost does not even take into account the cost of broken relationships.

Need Another Example? The SPCA Takes Estate To Court

Just recently, I read this CBC article. Eleena Murray from Vancouver owned a home in Point Grey, one of the country’s most expensive neighbourhoods. She passed away at the age of 99, so I think it’s fair to assume she probably acquired the home at a reasonable price, when those prices existed in Vancouver.

In her will, which was presumably prepared by a lawyer in 2003, she gave the British Columbia SPCA the residue of her estate. The residue is what’s left over once all the taxes, expense and specific gifts are given. From what I can gather from the article, Eleena was unmarried and did not have children. This is not unusual for people who do not have children. They often wish to benefit a charity.

However, on her 99th birthday, she drafted a handwritten note that limited the amount gifted to the SPCA to $100,000. While holographic wills—AKA handwritten wills—are not recognized in BC like they are in Manitoba, the court in BC has a lot of discretion to consider any “record, document or writing” to be a valid will.

The SPCA in BC is challenging the handwritten note because, if the court deems it a will, the SPCA stands to lose $1.3 million. The family is accusing the SPCA of being greedy, but the same could be said for the family. Under what conditions did Eleena write the note limiting her gift to the SPCA? Why did Eleena change her mind about the estate? In 2003, her lawyer would have advised her of the will’s effect. Why does she now want to benefit the family instead of the charity of her choice?

In this case, the court will likely receive evidence around the making of this note. I suspect the judge will have some of the same questions I posed above. Had she changed her will with her lawyer, the lawyer would have taken notes. Those notes would be admissible into court via the lawyer’s oral evidence. The case would certainly be a lot clearer. The SPCA may not have even challenged the change had it been prepared by a lawyer.

The practice area of estate litigation is a growth area in the practice of law. According to some, the largest transfer of wealth in our history is starting with baby boomers starting to pass.

Spend a reasonable amount now instead of risking 20 times as much down the road.

We offer clear, understandable wills and estate planning in Winnipeg, Manitoba. Our mission is to make law more accessible to Canadians.